Following a welcome by Chris Over, Ella Chapman offered the invocation. LaSalle County Stockman President Ken Bernard and Vice-President Sarah Lukach thanked those in attendance for coming to honor and recognize the youth of LaSalle County.

Win-A-Show-Animal essay contest winners were announced by Melissas Bernard. Each winner wrote a 250-word essay on “Why I Want to win a Show Animal.” Each year, an animal from beef, swine and goat breeds is donated as the prize for the winning essay and those animals will be shown next July at the LaSalle County Junior Fair. This year’s beef winner was Brayden Wilson, prize donated by Walter Brothers, Grand Ridge; the swine winner was Alexis Walkling, prize donated by the Corcoran Family, Ottawa; and the goat winner was Ruby Dittmer, prize donated by Inskeep Acres, Marseilles. 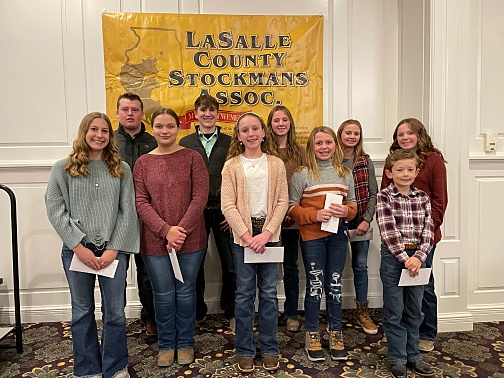 LaSalle County Stockman awarded two $1,000 scholarships, which were presented to Kylee Zoran and Nick Angus. The 2021 Stockman of the Year was presented to Larry Stillwell of Peru. Larry and his wife, Nancy, farm in the Tonica area.

In addition to hosting a banquet to honor youth who showed livestock this past year, the LCSA strives to promote and support young people as they build an agriculture career and lifestyle. This could be through a cow herd, a hog enterprise, sheep or goat herd or any agriculture field. The banquet is one way to encourage and recognize LaSalle County youth in agriculture.

For the past 18 years, LCSA has also provided the platform to return over $275,000 to the youth of LaSalle County through their programs such as the Animal Essay Contest, scholarships, sponsoring various classes at the FFA fair, LaSalle County 4-H & Junior Fair, Breeding Awards and the Live Market Animal Auction.

Upcoming Stockman’s events for 2022 include LaSalle County Farm Bureau Ag in The Classroom; scholarships (applications due in June); sponsoring the Bred & Owned Class at the LaSalle County Junior Fair in July; sponsoring the IL Section 7 FFA Grand Champion & Reserve winners; Win-A-Show-Animal (essay applications due in October); and the 18th Annual Harvest Awards and Recognition Banquet, which will be held on Nov. 22, 2022, always held the Tuesday before Thanksgiving.

Meetings are held the first Wednesday of each month at various locations throughout the county. Follow and LIKE them on Facebook at “LaSalle County Stockman’s Association” for information or activities. The LCSA appreciates everyone throughout LaSalle County and the surrounding area for their continued support of their organization and they look forward to 2022 and many more successful years.