Elks announce Mendota area Teens of the Month for October 2020

OHIO - The Elks recently announced their October Teens of the Month, Meghan Davis and Sean Fitzpatrick. 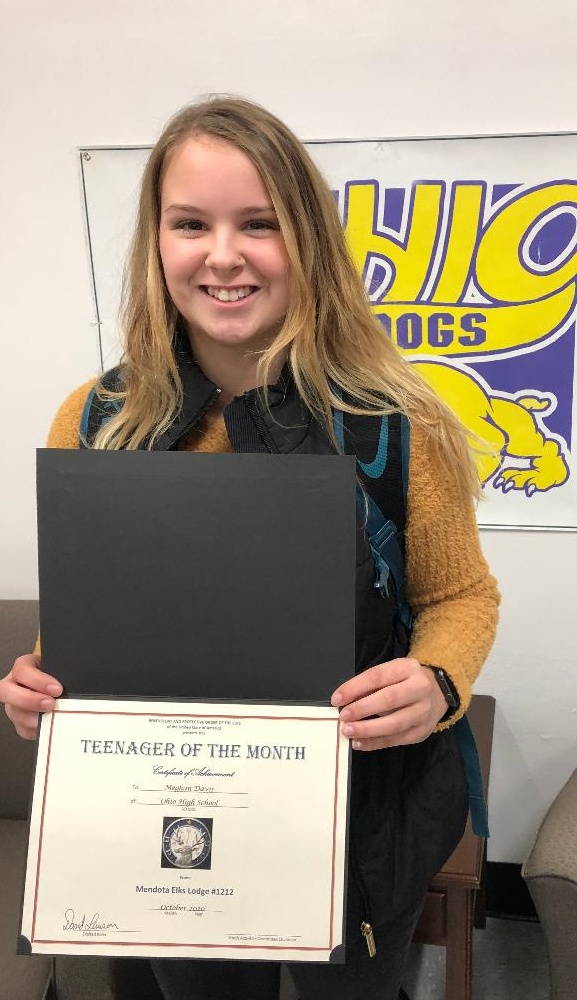 Meghan Davis, a senior at Ohio High School, is the daughter of Misty Davis. She is currently 2nd in her class, has been on the high honor roll every year of high school and has been in National Honor Society since sophomore year.

Meghan played on the volleyball team and was a co-captain (freshman through junior), played softball (freshman and sophomore) and was All-Conference Academic for volleyball and softball sophomore year.

She was class president (freshman), treasurer (sophomore), vice-president (junior) and secretary this year. She is also secretary of Student Council and president of National Honor Society this year.

Meghan enjoys hanging out with family and friends and doing things outside. She loves playing volleyball and going to sporting events. She currently works at Beck’s and has also done some babysitting throughout high school.

Sean Fitzpatrick, a senior at Ohio High School, is the son of Rachael and Paul Fitzpatrick. He is currently 1st in his class, has been on the high honor roll all four years and has been in the National Honor Society since junior year. He has also taken two Dual Credit classes and already earned eight college credit hours.

Sean has played football all four years, was on the basketball and track team (freshman through junior), was All-Conference Academic for basketball (sophomore) and for football (junior). He was named Football Mister Defense junior year and was honored as Most Valuable Sprinter in Track sophomore year.

He has been in Science Club, FFA, on the FFA Trap Shoot Team, FFA Soil Judging Team and FFA Live Stock Judging all four years. He has been to the FFA State Convention and in the FFA State Science Fair Competition (freshman and sophomore), attended the HOBY leadership conference (sophomore), on Prom Committee (junior), as a senior was a member of the National Society of High School Scholars and has taken part in the Variety Show (freshman through junior).

Sean enjoys hunting, fishing and spending time with his family. He also likes working on vehicles, playing the guitar, and playing and watching sports.

Virtual program shows how to make a holiday centerpiece